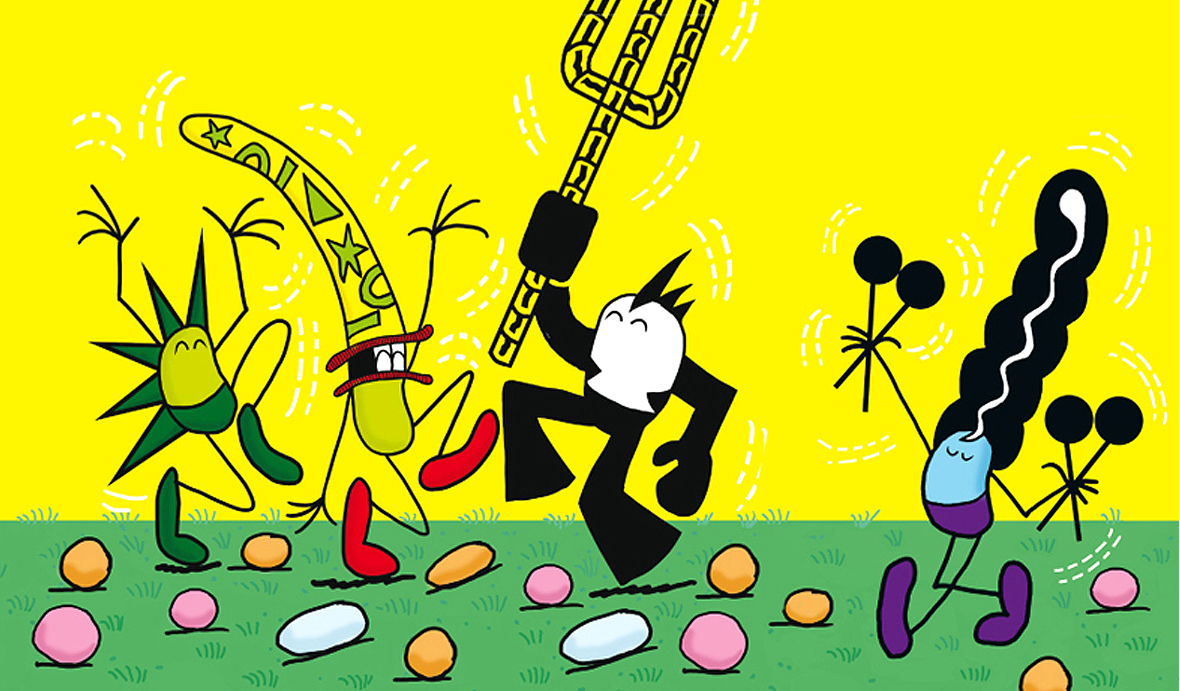 I started translating comics when I began featuring guest comics by international artists in the back of my self-published German-language title ineinander.

My most ambitious comics translation to date is the adventure of bringing Larry Marder's incomparable Beanworld saga to German-reading audiences.

In his introduction to the third volume of the Beanworld series from 2009, comic artist Jeff Smith remarks:

Beanworld is a mixture of Krazy Kat, Tinkertoys, and Haiku [...] The language of Beanworld has its own cadence, and many of the Beans' names for things have a way of creeping out of the book into your permanent memory: Gunk'l'dunk, Der Stinkle, and Krink'l Leg, to name a few.

Aptly put. There truly is a very elegant, Haiku-like minimalism at work in Marder's art as well as language, with both sign systems sometimes even bleeding into one another. Despite all its kookiness, though, Beanworld's ecosystem as well as nomenclature is also extremely systematic and modular.

Chow, for example, is eaten in the Chow'Down'Pool after Chow Pluk'rs have collected it in their Pluk'n Wands – interconnected linguistic Tinkertoys:

It was clear to me that if I wanted the German “Bohnenwelt” to live up to the original,  it would have to be a team effort.

For translating the underlying organized madness, I was lucky to get Oliver Naatz on board, a German comics writer, artist and professional whack job (and to this day the only translator bold enough to stray from the original script of Alan Moore's “Tomorrow Stories” in order to preserve its alliterative retroness.)

To uncover the lyrical layers, I successfully wooed renowned poet and publisher Daniela Seel. Daniela has exceeded herself in analyzing and transcribing the ever-changing score of Beanworld's rhymes, assonances and lyrical meters.

I myself could help with correlating the many advertising claims, pop culture references and comic-centric allusions woven into the story („Gunk'l'dunk Gang assemble!“).

Together we tried to bring to life all the different species and creatures in and around the Beanworld by trying to find German analogies for their varying idioms and speech patterns. Worst of all: the Boom'r Band, three Bean musicians with a progressively deteriorating manner of speaking:

Something that gets overlooked all too often in comics translations is the visual aspect. Whereas time and effort is put into finding the right words, the dimensions of word balloons and caption boxes are considered to be set in stone.

Some German words are so long that they have a perspective

and you can imagine the horror of minuscule lettering cluttering the speech balloons of German comic translations, diverting the reader from the actual story.

Just as the original's words have to be carefully translated, so does the visual language of comics, its speech and thought balloons and even panel borders sometimes having to be adjusted in order to enable the story to flow:

Reviews of „Bohnenwelt“ and its translation were very favourable, with cultural critic Georg Seeßlen stating that

The translation has created a unique equilibrium between the poles of simplicity and sophistication; it certainly could not have been done any better.

Our translation even gained recognition at the German literary translation prize “Christoph-Martin-Wieland-Übersetzerpreis” (touché, Twain), receiving an honorable mention for its “high degree of creativity and poetic dadaistic force”.

“Bohnenwelt” is now available in German from Ventil Verlag.

If you haven't read it yet – what a gift. A gift comes!

Erla Stefánsdóttir needs no introduction. She is Iceland’s first and foremost celebrity seeress every foreign camera team turns to when covering the Hidden People phenomenon.

Three main narrative threads are spun into the yarn that is “People Not Seen”. The second thread consists of Icelandic fairy tales, most of them historic, some more recent. To not take sides