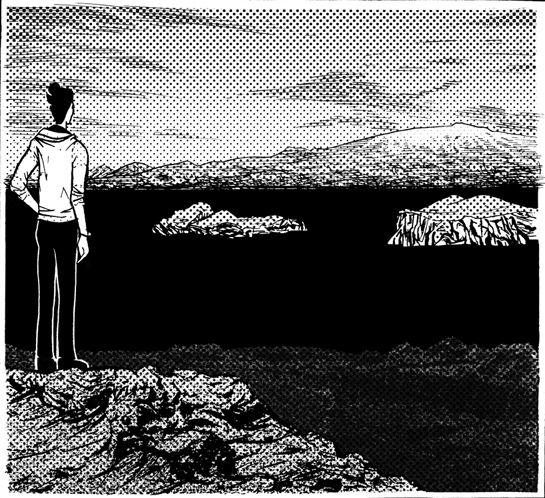 Three main narrative threads are spun into the yarn that is „People Not Seen“.

The third thread is the description of a journey I undertook with two friends: crossing Iceland from south to north on the volcanically active area where the Eurasian Plate and the North American Plate drift apart.

As I realized that there is an aspect of land wights or genii locorum to the Elves, who are always connected to ideas and places of pristine nature, I decided I would have to search for them in the deserted inland rather than just on the populated coasts.

The journey took us from the volcanic southern island of Surtsey to the green valleys of þórsmörk, from the iridescent highlands of Landmannalaugar to the vast nothingness of Europe’s largest glacier Vatnajökull, from the barren Ódáðahraun desert to lake Myvatn and eventually to Iceland’s northernmost hot spring at the coast.

Despite all these serene places of otherworldly beauty, this thread also turned out to be a story of exhaustion, losing one’s way, of a city boy overwhelmed by a ferocious nature raging without and within.

Just a quick note that if you'd like to reach me, you can find updated contact information right here.

An epistolary comics conversation about culture and catastrophe between three artists: Dirk Schwieger (Germany), Matsuoka Waka (Japan) and Christina Plaka (German-Mangaka-with-Greek-roots-living-in-Japan, you figure it out) – started shortly before the Fukushima Daiichi nuclear disaster.